Last March I had the incredible experience of spending three weeks in South Africa, and then a week in Sumatra, a large island in Western Indonesia, with WPS’ Executive Director Eric Schmidt. Eric had been invited to assess the viability of establishing a new rhino research facility on a property managed by one of WPS’ field partners. While there, we were privileged to be able to visit one of several conservation areas in the rain forest where researchers were placing camera traps in an attempt to track endangered wildlife such as the Sumatran tiger, Sumatran rhino and sun bear.

Our trip to Sumatra began in the incredible juxtaposed megalopolis capital city of Jakarta. Jakarta is a mixture of old and new all vying for space on the island of Java. There are slightly over 30 million inhabitants only surpassed by the Tokyo/Yokohama megalopolis of 37 million according to the 2014 census. One recent survey shows Jakarta as one of the leading real estate markets in the world for the sale of luxury condominiums mixed in with corrugated steel and tarp roofs.

Below is one of the many roadside shops in Jakarta, (can’t quite say sidewalk shops since there are no sidewalks). Keeping track of cars and scooters while walking is paramount, plus leaping over the various cooking fires that line the roads. Scooters are the main mode of travel anywhere in Indonesia, as the parking situation on the top of the parking garage shows… all scooters. 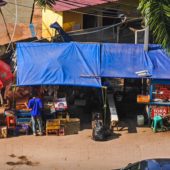 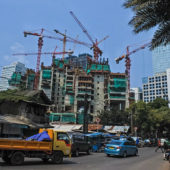 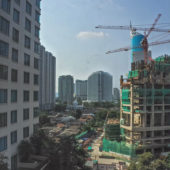 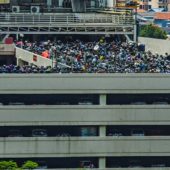 Arriving at Padang, Western Sumatra our trip then turned to land travel and an eight hour road trip to our destination. Once we arrived it was determined that in that eight hours, we traveled approximately 80 miles as the crow flies from Padang. Road conditions were fair in most places, and in some nonexistent as the road had slipped off the hillside in the rains.

On the side of Danau Diatas (Lake Diatas) was this nondescript and signless roadside Kafe that one had to be a local to know even existed. There were no menus, and roughly a dozen plates of different local fare were placed on the table with rice and an incredible curry paste. Sumatran coffee is wonderful! It is served boiling hot in the glass and the trick is to let it drip over the side into the bowl below, and then sip the coffee from the bowl. The flavor was incredible. 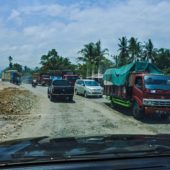 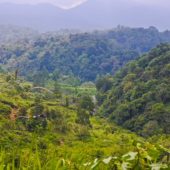 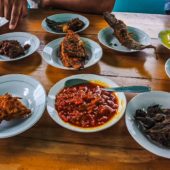 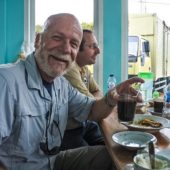 Our hosts pulled over to show us this 13th century kings palace which is not uncommon to come across while traveling this 6th largest island on the planet. Check out the hand carved ornate exterior walls and one of many water sculptures that dot the surrounding ponds. There are families that live on-site to maintain these living museums. Rice cultivation surrounds villages and can be defended against the encroachment of the rain forest.

Local children had a laugh at the bald headed grey bearded caucasian man behind the camera, a sight not seen a lot in this part of the world. After we arrived, we met our hosts and had a planning session for a visit to one of the conservation areas in the morning. Time for some light conversation (with a lot of translation). A good time was had by all. 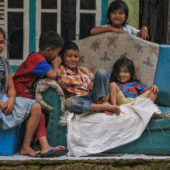 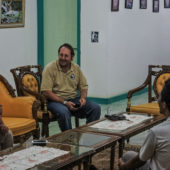 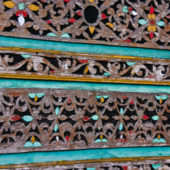 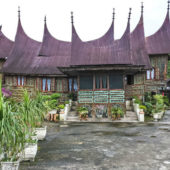 In the morning, we took a four kilometer hike through the rain forest conservation area with our hosts, security forces, and several students from one of the universities in Jakarta staying on the plantation. Entering the rain forest it appeared things were going to get wet pretty quickly. Eric and one of our hosts were surveying the trail that vanished at times and reappeared, with the cry of something akin to “Hey, it’s over here!” And a friendly reminder that is clear in any language, we were in Sumatran Bear and Tiger territory, beware!

Don’t miss the Gibbon at the center of the image just above the green foliage. It was one of a small group we were fortunate to observe from afar and then they were gone, disappearing into the canopy leaving only their vocal expressions for us to hear. 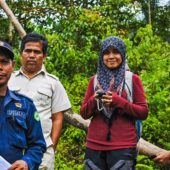 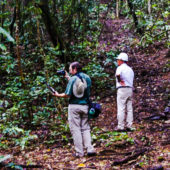 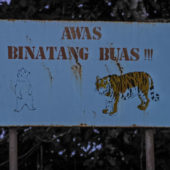 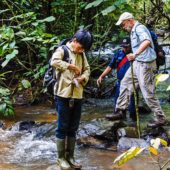 Nature’s unique shapes found in the rain forest. Moss is everywhere and always a beautiful backdrop. Can you see the Sumatran bear claw marks on the tree?

Bill E. Haals, WPS Volunteer & Photographer
Coming from a varied background mainly consisting of over 30 years as a 911 Public Safety Dispatcher, starting in the profession before the implementation of 911 in Colorado and computers. In the middle of that profession was a 13 year stay with several prime contractors of the National Science Foundations Antarctic Program with 9 of those years as a supervisor in operations and as the McMurdo Operations Manager. Bill returned to Boulder completing his tenure in dispatching retiring in 2015 leaving him plenty of time to volunteer with WPS.

His interest in flora and fauna conservation started years ago as a Boy Scout in Colorado and then intensified during his time in Antarctica of which during the 1990’s was a large on-going cleanup of the US stations and research areas. Bill’s photography interests started back in the early 1970’s and in this day of digital photography still takes time to bring out the film camera and develop the black & white film over the kitchen sink. Being a small part of WPS as an volunteer has been a incredible experience and he hopes it continues as long as possible.

WPS mobile apps for those who share a love of nature and a passion for wildlife protection and conservation.

Want to know more about Indonesian wildlife? Our Indonesian field guide app highlights the mammals that inhabit Indonesia, categorizing them according to the IUCN Red List, the world’s most comprehensive inventory of the global conservation status of species.