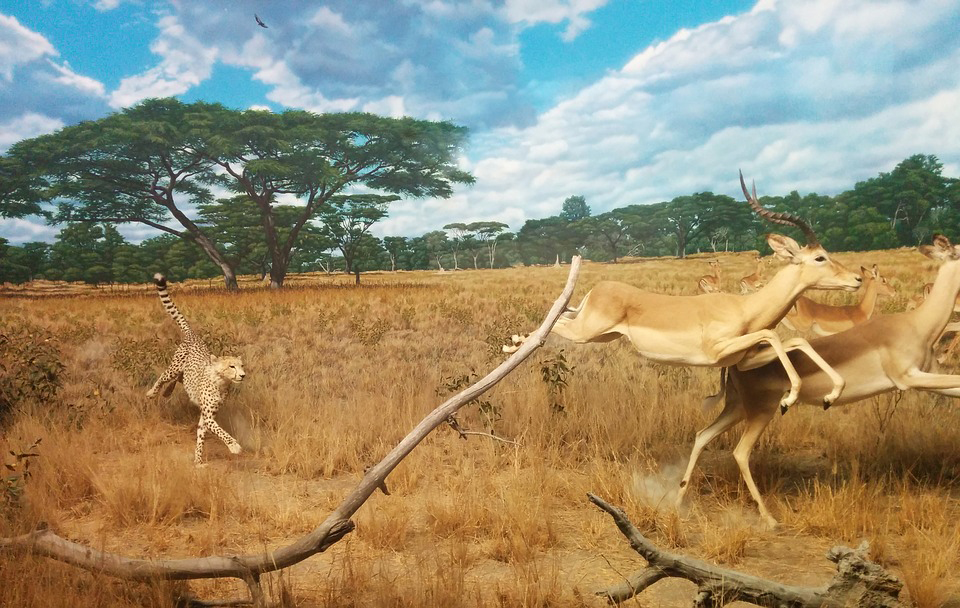 The annual Running Wild fundraiser is less than a month away, so get your running shoes ready for a fun run and good company! Proceeds will benefit Wildlife Protection Solutions and other wildlife organizations working to conserve threatened animals in Africa. Whether you run fast like a cheetah or slow like a tortoise, there’s a place for everyone at this community event. In the meantime, enjoy this primer on the running speeds of five African land animals these organizations help protect.

Do You Know the Running Speeds of these Five African Animals?

It may come as no surprise that the cheetah is the world’s fastest land animal, clocking speeds up to 75 mph that give it the edge needed to take down prey. Such speed is possible due to the cheetah’s anatomy. The smallest of the big cats, its lithe frame and long tail keep it agile on the ground, and its large nasal passages and deep chest provide plenty of air and sustaining lung power. With populations located primarily in sub-Saharan Africa, the cheetah faces various threats including loss of habitat and prey, conflict with humans, competition with and predation by other carnivores, and the illegal pet trade.

Capable of running up to 50 mph—a speed similar to that of lions—the wildebeest, or gnu, can outrun many other land animals. Its fast speed is an advantage since it is prey for most African predators, including lion, cheetah, hyena and wild dog. Wildebeest travel in large herds. During the annual “Great Wildebeest Migration,” between one and two million wildebeest, together with large numbers of zebra and gazelle, graze their way across the grassy Serengeti plains of northern Tanzania and into the Masai Mara ecosystem of Kenya in search of food and water. Of these numbers, approximately 250,000 die each year due to predators, thirst, hunger, and exhaustion. They are especially vulnerable during calving season in February.

The ostrich is both the largest and fastest bird in the world. These land birds reach speeds up to 43 mph despite their height (up to 9 feet tall) and weight (up to 320 pounds). They use their powerful two legs not only to run fast but also to kick and even kill attacking predators, such as leopard, hyena, lion, and cheetah. Their wings won’t lift them off the ground, but they do help guide their movements at high speeds. Ostriches live in the grasslands and woodlands of sub-Saharan Africa. Omnivores, they eat plants and also snakes, lizards, rodents, and insects. Ostrich chicks are the largest of all baby birds and are cared for by both males and females.

Hopping to the Finish: Riverine Rabbit

With strong back legs and broad feet, the riverine rabbit of South Africa can run an average of 25 to 40 mph and jump over bushes nearly three and half feet high to escape predators. A solitary, nocturnal animal, it lives in riparian habitat along river streams in the Karoo desert of the Northern Cape Province. It is identified by its brown fur, white rings around the eyes, and dark stripe along its jaw. Females birth only one kitten a year. With a population numbering 200 or less, the species is listed as critically endangered primarily due to loss and degradation of habitat from agricultural farming—a situation made dire by its low birth rate.

Hippos may appear to be lumbering and slow because of their short legs, large heads, and big bodies, but in actuality they can run up to 19 mph on land—that’s much faster than the average running speed of humans. Two species of hippopotamus live in Africa: The common hippo, or large hippo, lives in Eastern Africa south of the Sahara Desert. The smaller pygmy hippo is endangered, with a range limited to forests in West Africa. The name hippopotamus means “river horse” in Greek. Both species are semiaquatic and herbivorous. Hippos are killed for their meat and ivory teeth, and also due to conflicts with humans.

Wildlife Protection Solutions is a registered 501(c)(3) organization. EIN: 45-5583283
We use cookies to ensure that we give you the best experience on our website. If you continue to use this site we will assume that you are happy with it.Ok