Sometimes it’s easy to feel overwhelmed by daily challenges: Balancing work and social commitments, coordinating kids’ school drop-offs and pick-ups, and even squeezing in a Starbucks run before you start your day can feel like a juggling act. And then sometimes you hear stories that so dwarf your daily challenges that it almost takes your breath away. You immediately gain perspective

Bill Haals, one of Wildlife Protection Solutions’ intrepid volunteers, brought back a story from Mongena Game Reserve in South Africa that does just that. He was fortunate enough to witness a black rhino release that was part of the Black Rhino Range Expansion Project (BRREP). That’s right: Imagine being tasked with delicately moving an animal that weighs roughly a ton to keep it from extinction. No pressure. 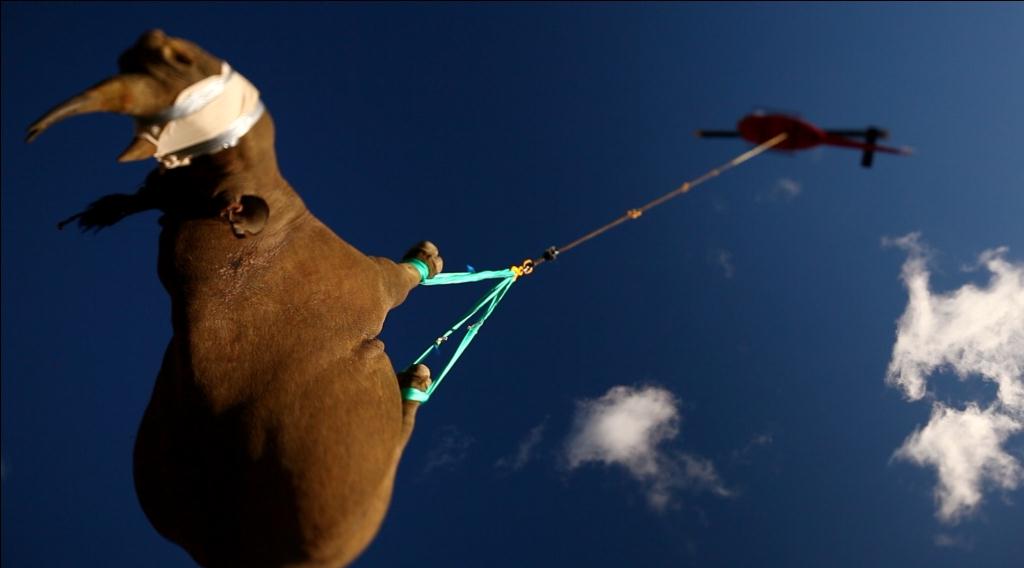 You may have seen the 60 Minutes report on the eye-popping solution World Wildlife Fund (WWF) and project leader Dr. Jacques Flamand have concocted to use helicopters to relocate black rhinos. It’s called the Black Rhino Range Expansion Project (BRREP). Relocation serves to both protect rhinos by moving them to safer areas, and also to strengthen and diversify local black rhino gene pools.

It’s simultaneously terrifying and moving to see rangers prepare rhinos to be literally airlifted to their new homes in under 30 minutes. They sedate then dangle the rhino – upside down mind you – to protect it during the journey. When the rhinos reach their new homes, the teams waiting there remove the horns (there are no nerve endings in a rhino horn, so there is no pain) to mitigate poaching risks. 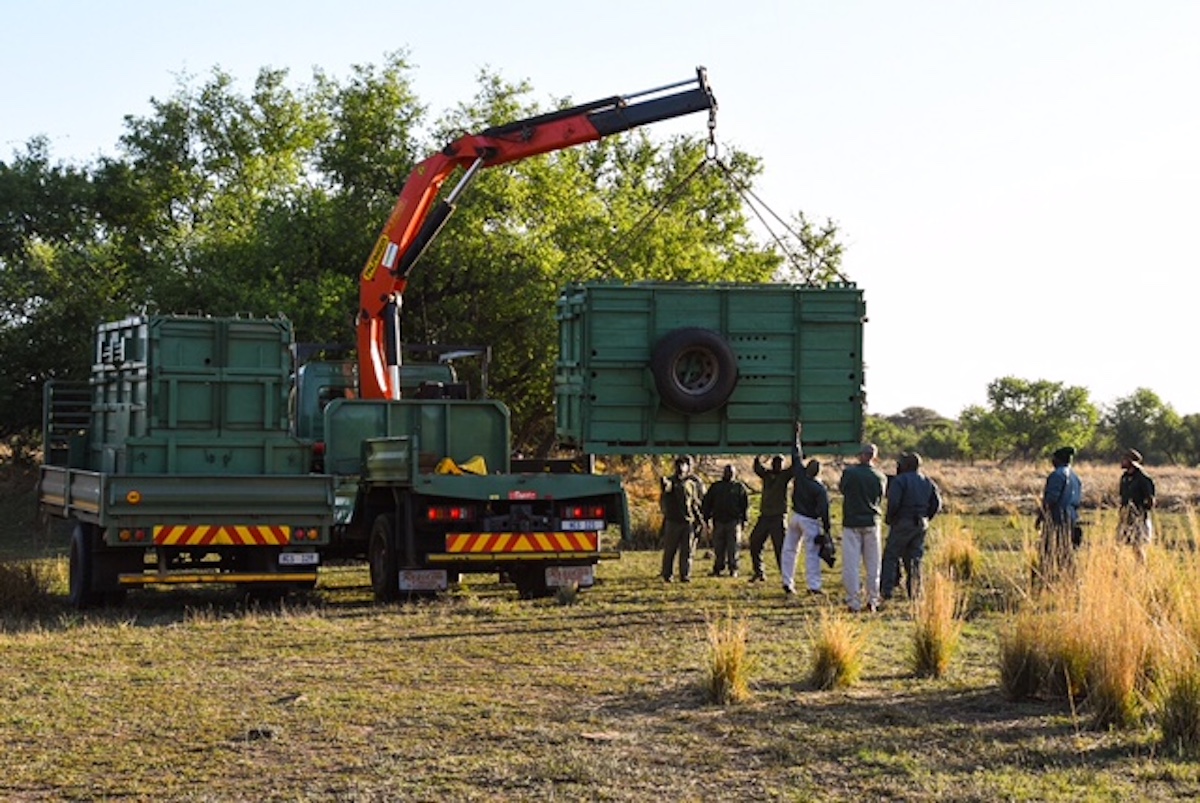 The BRREP doesn’t solely, however, rely on helicopters to relocate black rhinos. They also use more traditional methods of transportation if terrain and time allow. WPS’s Bill Haals was fortunate enough to see a relocation with seven rhinos transported in steel containers.

Last fall he was in Mongena Private Game Lodge (within the larger Dinokeng Game Reserve) working on a surveillance project for WPS. The site had been designated a good relocation destination by WWF, and, one day while pouring concrete as part of the WPS project, he was invited to watch a black rhino release as part of the relocation project. 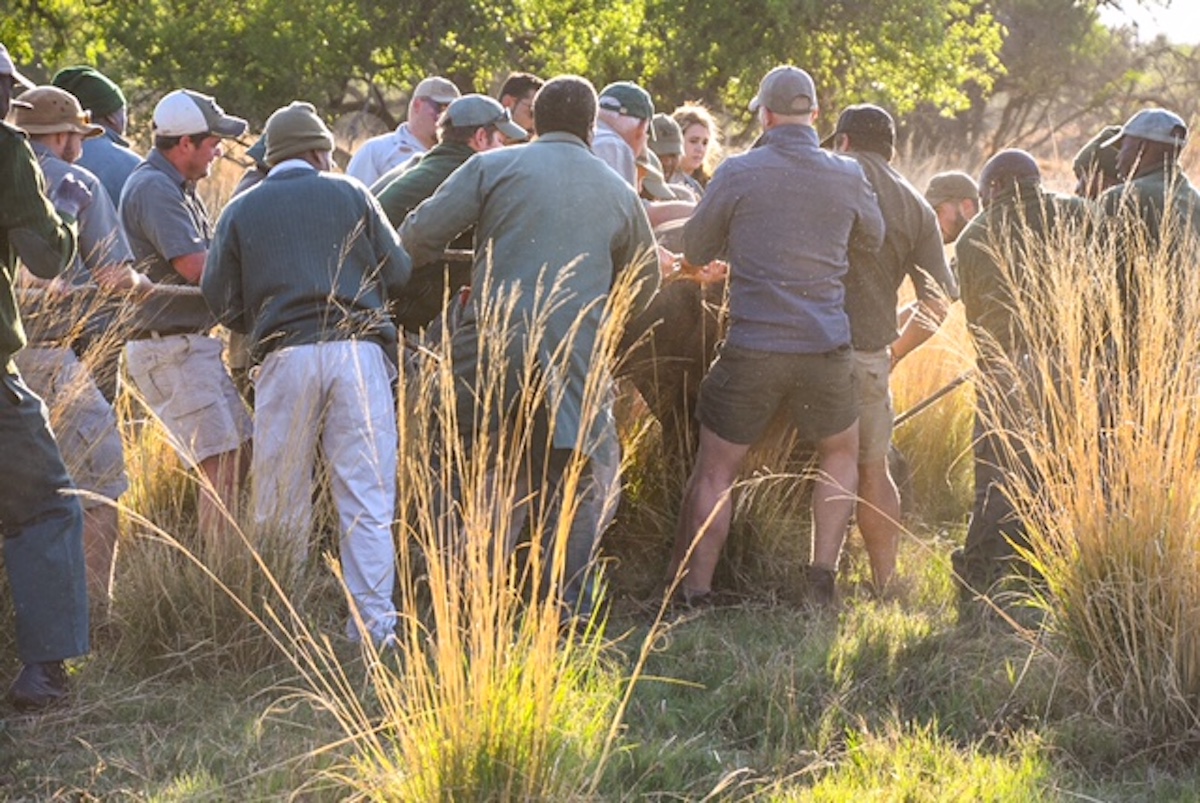 It wasn’t, I assume, a hard decision for Bill. The group met just before 6:00 AM and drove off to meet up with the WWF personnel and Game Capture team. The early hour was required given this release utilized steel containers (see left), not helicopters, and heat was a factor. These massive steel cages were delivered by huge green trucks with cherry pickers.

While the team was preparing to release the rhinos, the tourists and volunteers (including Bill) were given explicit directions about where to be, where not to be, and what to do upon release. Black rhinos can be aggressive, which, among other characteristics, distinguishes them from white rhinos.

It was certainly the most top-of-mind distinction that day! Almost as if to prove that aggression, many of the rhinos in the steel containers so violently rammed the doors in transit that the doors had to be pried open with crowbars. 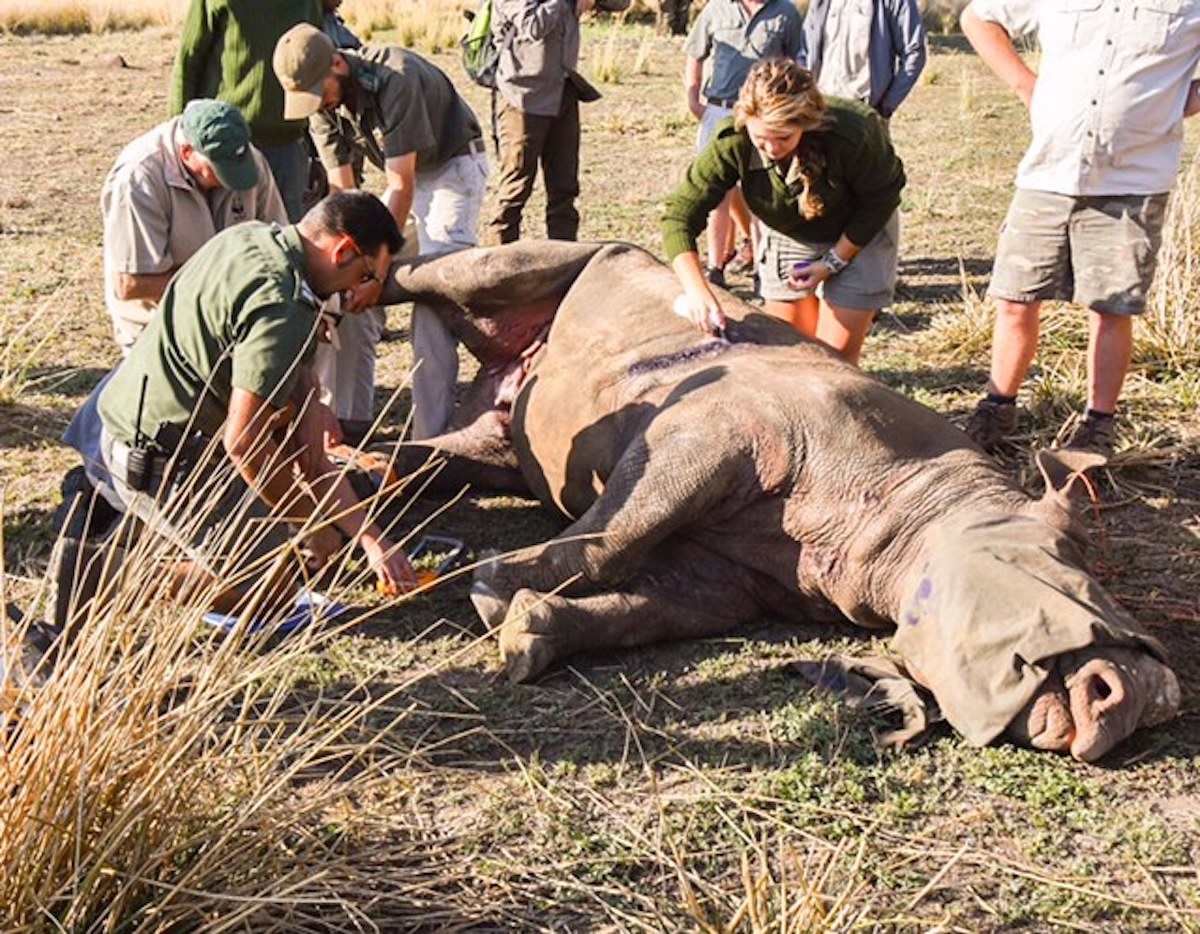 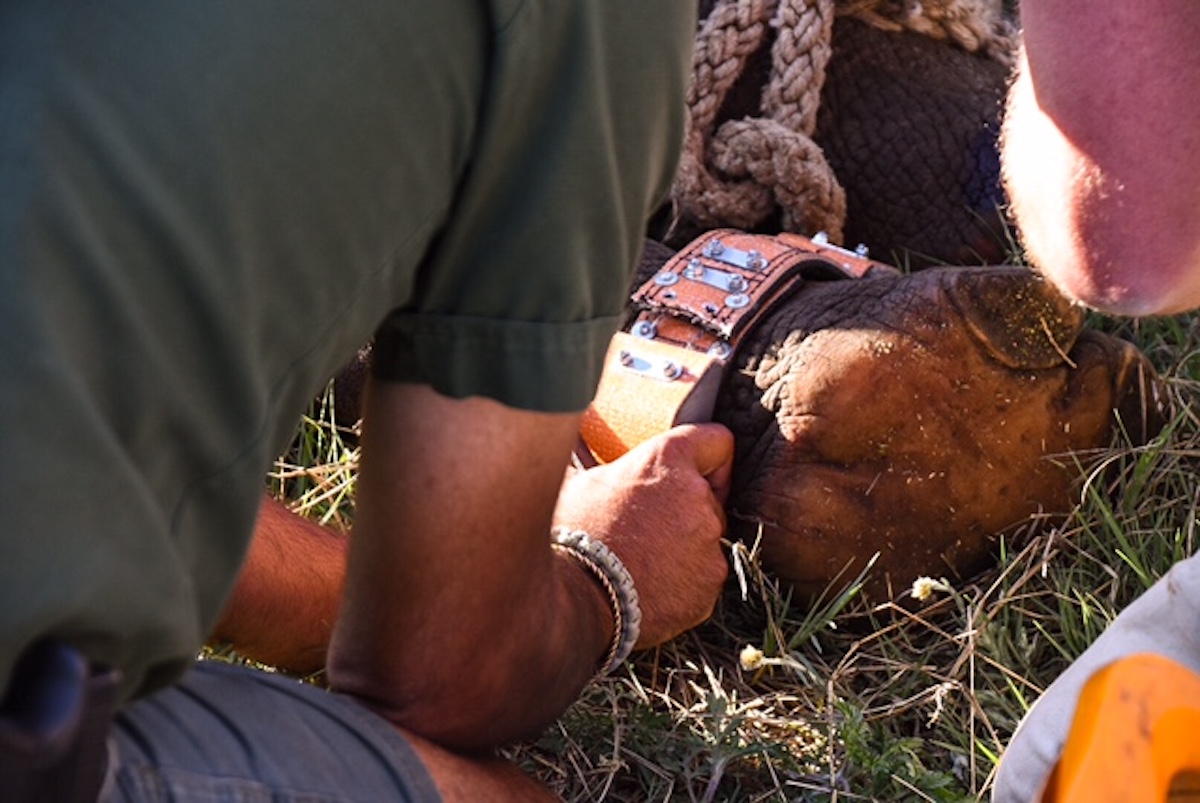 Then the excitement began. Once the rhinos are ready for release, one of the veterinarians climbs on top of the steel box and darts the rhino with anesthesia. The doors open, and a dozen men are at the ready with ropes to slow the unhappy, disoriented rhino.

The team doesn’t want the rhino to wander too far away before the anesthesia kicks in; the vet still needs to conduct tests to make sure the rhino is in good health. Once the rhino is down, the team first covers his or her eyes to keep them moist and clean.

Then the vet takes over with blood tests to confirm the rhino is well. It was at this point that Bill and the other observers were told to get back into their transports because once they wake up the rhino, all bets are off! 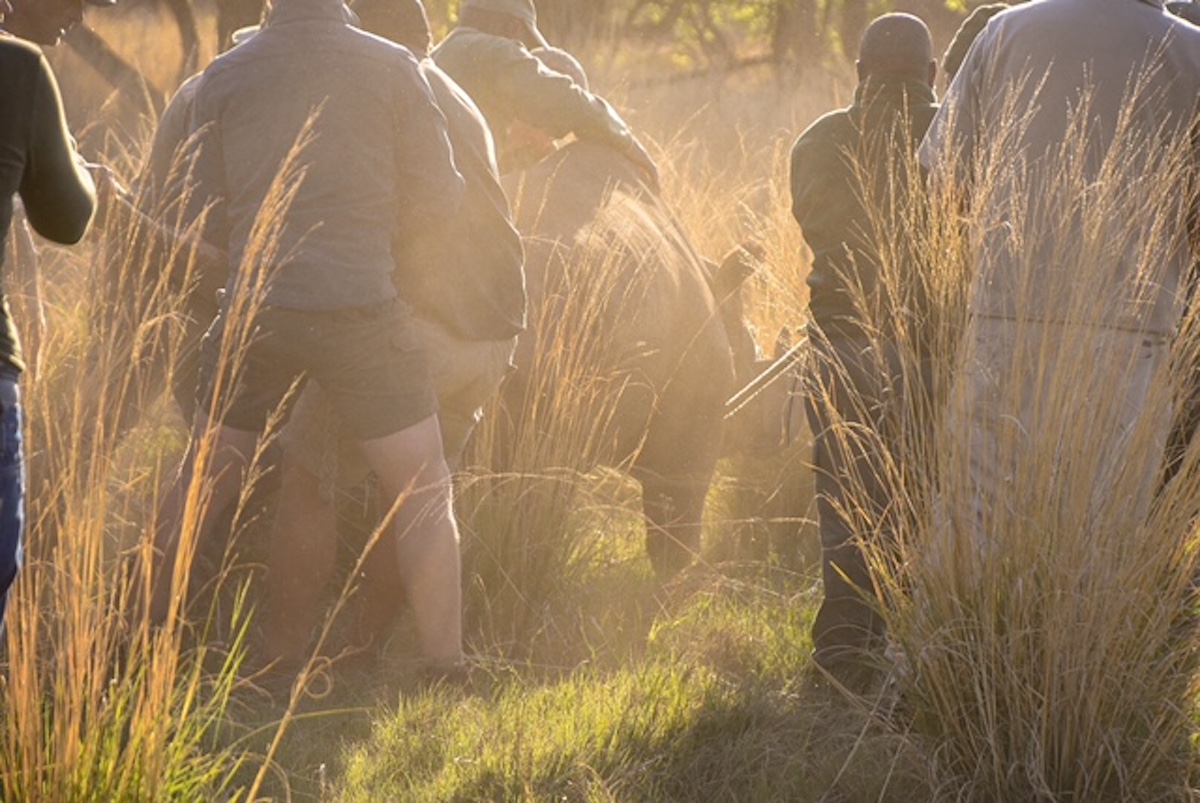 All in all, Bill and the other volunteers and tourists were lucky enough to see two of the seven black rhinos released. As Bill said, “[they] went as smooth as something of this nature can go!”

The new black rhino have the luxury of a secure, abundant habitat, thanks to all the organizations working together–WWF, WPS, and many others–to protect these critically endangered, critically important, majestic animals.

The plight of African rhinos–especially black rhinos–is, sadly, well known. It is estimated that there are only 5,000 of these majestic animals remaining. The illegal wildlife trade has devastated the number of both black and white rhino species, and medicinal misinformation fuels the demand for rhino horn in East Asia, especially Vietnam.